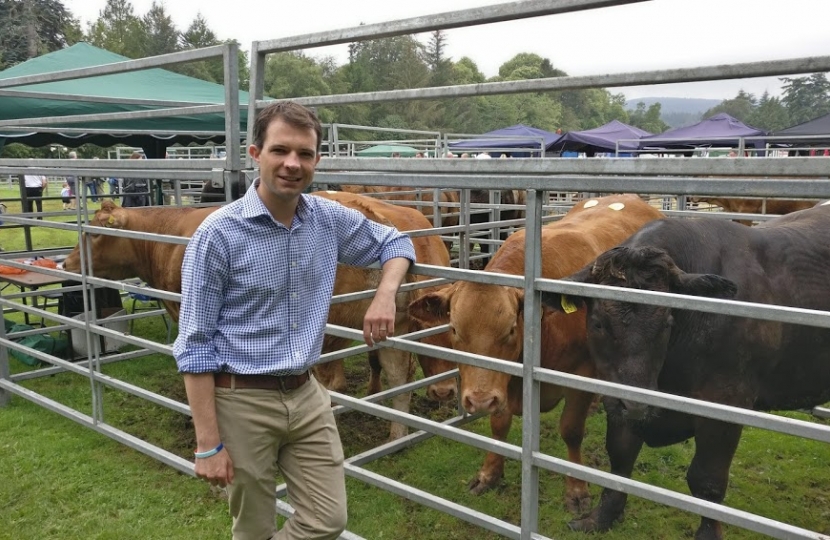 I have the pleasure of representing a constituency in Aberdeenshire, home of the best beef, lamb, berries & cereals produced anywhere in the United Kingdom with the most determined farmers in the country – battling snow and frost in late Spring for example- and ensuring that food production has continued in this most difficult time.

Agriculture is devolved. So the majority of what this bill seeks to implement will apply in only in  England or England and Wales. In Scotland we have seen the Agriculture (Retained EU Law and Data) (Scotland) Bill introduced to the Scottish Parliament ahead of new legislation coming in due course.

As the official opposition in the Scottish Parliament, the Conservatives supported this bill last week and will play our part in scrutinising any legislation to ensure our new agriculture framework is the best for Scottish farmers that it can be- freed as they will be from the restrictive Common Agricultural Policy.

However, there are important reasons for Scottish MPs to take interest in this bill, for whilst policy and implementation of that policy is wholly devolved, agriculture in our United Kingdom operates in a single market across our islands.

And, of course, crucially, the funding for agricultural support – despite mechanisms being developed in Holyrood, will be delivered by the UK Government as part of a pan British funding framework.

This bill also seeks to make provision for UK-wide reporting on food security which is vitally important.

It is welcome to see in the bill, the commitment to the creation of a framework to allow Great Britain’s meat levy boards, to work establish a system for fair redistribution of levy. It has been a matter of contention for a, well, very long time that farmers in Scotland lose out to the tune of around £1.5million a year due to the animals they have reared being sent to other parts of the UK for slaughter.

The interim measures, allowing ring fenced funding to be spent across the country by the boards, works fine, but a permanent solution is long overdue.

Scottish farmers will also welcome the introduction of obligations for fair contractual relationships between producers and purchasers. We need fairness in the supply chain.

But, much of the focus around this bill has been on the proposed New Clauses 1 and 2, in the names of my Honourable Friends the Members for North Dorset and Tiverton and Honiton respectively. I fully understand why the New Clauses have been proposed. And the Honourable Member for North Dorset will know that it is incredibly rare for me to disagree with him on any matter - and I do so today cautiously and with the utmost respect… for I know that the intention behind his and the Member for Tiverton and Honiton is utterly good- to protect UK farmers from competition from sub standard imports.

However, in attempting to enshrine in law, as an amendment to this bill, that any future trade deals with any other country should require that country to have the same high standards as our own, could be, potentially, damaging.

For example, none of the transitioned EU FTAs, such as its agreement with South Korea, or South Africa, have exported domestic welfare production standards; the existing mandate for our European Union Trade Deal – a deal we all want to see succeed, would have to be altered; no current imports to the UK are required to meet our domestic production standards and the World Trade Organisation – an organisation we defend and support, requires outcome based trade deals, not process based rules and would see this, rightly as extra territorial regulation. So a challenge there would be expected.

In the next 30 years, supply of food needs to rise by about 50% to meet the needs of a wealthier, growing, global population. I don’t want anything that would stand in the way of our high quality, world leading Scottish and British products reaching the shelves of consumers around the world.

It is precisely our high standards and high quality of produce that makes our produce so attractive to the outside world. And, because of that, and because we believe in high welfare standards, the Government has given its commitment that in negotiating trade deals, we will not allow our domestic welfare production standards to be in any way diminished. We will protect, defend and enhance our food safety, environmental and animal welfare standards and we will actively seek to export these, world leading standards, and our expertise, to new partners around the world.

I think the Government should take notice that significant numbers of Honourable Members, particularly from rural constituencies, myself included, will be watching the trade negotiations- hawk like. We must ensure that, as we exit the CAP, British farming retains the highest possible standards and remains competitive.

I look forward to working with the both of Scotland’s Government’s to see what we can do to promote home grown, locally produced food to be bought here – including, I hope, progress on effective labelling on production standards.

This is an Agriculture Bill, not a Trade Bill. No doubt we will revisit many of the issues that have arisen here today in future. But for now I think we should give this bill our assent and do all we can to ensure British farming has a bright, productive and profitable future.