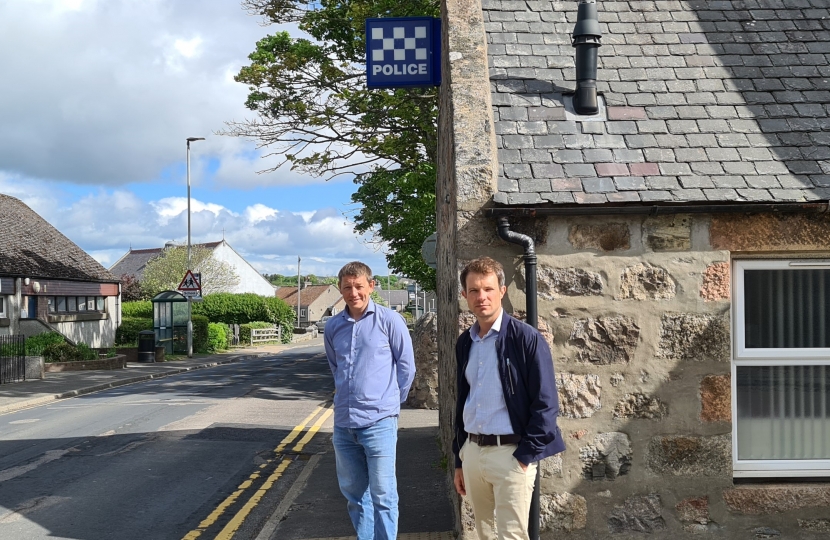 Andrew has called on Portlethen’s Asda supermarket to be considered as an alternative home for the town’s closure-threatened police station over fears its absence will lead to a rise in crime.

Andrew met the Scottish Police Authority and Scottish Police Federation to outline his concerns at plans to shut the town’s base on Cookston Road earlier today (Friday 18th June). The meeting came exactly one week after Andrew visited the station itself.

During the meeting with David Threadgold, Calum Steele and David Hamilton, Andrew outlined possible alternatives for the Portlethen base such as the nearby Asda to ensure the town isn’t left without any officers.

During the meeting he was told that enough work exists to accommodate two officers at a time at the station, and that three special constables work in Portlethen and so far - there has been no confirmation of where they would go if the station closes.

Andrew has expressed fears over a potential rise in crime in Portlethen with less being reported if police are stationed away from the town.

He said: “We must start looking at alternatives so officers remain stationed in Portlethen and there is no reason why the police cannot be in a unit within Asda.

“I’m really concerned that crime may rise in the town if officers are absent from being based there and this must be addressed with the utmost urgency.

“The closure is not motivated by improving service in Portlethen, it is motivated by saving money and that shocking situation lies with a reduction in Scottish Government funding.

“The town is being left at the bottom of the pile and that is simply unacceptable when it comes to crime and prevention.

“Residents deserve to have a visible police presence which is essential to detect, prevent and reduce crime – to have this taken away from them is scandalous.”

Andrew will now be writing to all residents in Portlethen as he seeks their feedback on the planned closure and other alternative locations for a unit to be housed.