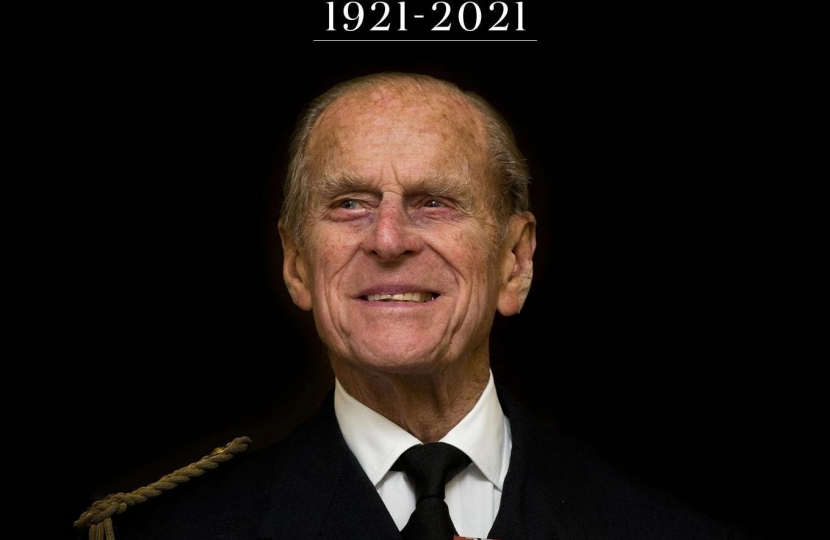 Andrew joined Members of Parliament from across the Political Spectrum this afternoon as each paid tribute to HRH Prince Philip, Duke of Edinburgh. The nation continues to mourn following the news of his death on Friday.

Andrew said in the hours following the announcement on Friday,

"Such sad news. A true servant to our country both as the Queen's consort and advisor, decorated serviceman in the Second World War and in his own right supporting countless charities, causes and organisations across the UK and Commonwealth. His loss will be felt across Deeside today by the people and communities he got to know so well over seventy years."

Today in his House of Commons speech Andrew continued,

"It is an honour to rise to pay tribute to His Royal Highness, the Prince Philip, Duke of Edinburgh today.

"I rise with, at the forefront of my thoughts, the many estate staff and estate pensioners at Balmoral and indeed, the many more in the wider Royal Deeside community who are today, mourning the passing not just of our Queen’s consort, but an employer, neighbour and friend.

"On Saturday, my wife and I climbed up to Prince Albert’s cairn, a large granite pyramid, standing high above the River Dee erected by Queen Victoria on the death of her Prince Consort.

"From it we looked across the Dee Valley, down towards Crathie, west towards Braemar and East towards Ballater. Behind us, though hidden by the giant fir trees rose majestic Lochnagar standing high above Glen Muik. All areas that His Royal Highness, through over 70 years of regular visits, knew and left his indelible mark on- a part of the world he and the Queen, like Victoria and Albert, loved as a private home. It was, of course, at Balmoral where Princess Elizabeth became engaged during the summer of 1946. Following their marriage, they spent part of their honeymoon at Craigowan on the Estate.

"And it was here he was able to enjoy his passions- stalking, shooting, fishing, taking a keen interest in the agricultural life of the estate (especially in the fold of highland cattle) and, indeed in improving the gardens-  developing a vegetable garden which is harvested every year during the Queens visits, creating a flowered walk along the terrace on the side of the garden and a developing a water-garden to the south-west of the castle which he himself dug out with a bulldozer.

"The Duke was also instrumental in regenerating some of the largest amounts of Caledonian Pine forest left in Scotland.

"Royal Deeside is a part of the world where people, although proud of their links to the estate and the family, don’t shout about it. Where, in a typically North East, restrained manner, they are afforded respect and allowed privacy as owners of one of the local estates.

"Even when, as remains regularly the case, they are spotted in and around Ballater.

"It was to Sheridan’s Butchers, in Ballater that the Duke would source supplies for the now famous family barbeques and I wasn’t unusual for him to pop in to various shops in the village just to say hello.

"In saying that, when walking around the estate if you were to see a dark green land rover appear over the horizon, tearing towards you, you’d better have your wits about you! Stories of ‘run ins’ with the Duke of Edinburgh are legend and numerous.

"My favourite, however, is of the occasion when the Duke, driving through the estate on a typical Aberdeenshire summer’s day (the rain was horizontal) came across a wet, bedraggled and miserable looking group of young hikers. He rolled down his window, “What on earth are you doing up here in this weather?” One of the young lads turned and spat out “Our bloody Duke of Edinburgh’s Award”.

"The family and estate still welcome hikers and ramblers- although of course it is expected that they respect the land in return. One year, the Duke of Edinburgh so fed up with visitors trampling across the estate not respecting the paths, stuck up signs, “beware of the adders”…it worked.

"Even at Balmoral there were, of course, public engagements. And he would rarely miss the annual Braemar Gathering- an event that draws tens of thousands of visitors from around the world each September- many just there to catch a glimpse of the Royal Family. For the Duke, however, as I saw with my own eyes, it was simply about enjoying the day and enjoying the sport.

"But above all, Balmoral was a private home. Somewhere he and Her Majesty the Queen could go to get away from the demands and pressures of public life – if only for a few months a year.

"And so it was not surprising that it was to Balmoral that he and the Queen turned, last summer, when restrictions eased enough to allow them a break. When they departed on the 16th September, the couple waved to the photographers. It was to be his last visit to the North East.

"Mr Speaker, the whole of the North East of Scotland is mourning the loss of the Duke of Edinburgh today. But no-where more so than in and around the Balmoral estate and communities of Royal Deeside.

"His Royal Highness was a proud Naval man. A decorated veteran of World War Two. And it was this in mind that I turned whilst writing this speech I turned to this part of the Naval Prayer -  “Preserve us from the dangers of the sea, and from the violence of the enemy; that we may be a safeguard unto our most gracious Sovereign Lady, Queen Elizabeth, and her Dominions, and a security for such as pass upon the seas upon their lawful occasions; that the inhabitants of our Commonwealth may in peace and quietness serve Thee our God; and that we may return in safety to enjoy the blessings of the land.”

"At Balmoral, I in peace and safety, I know His Royal Highness did just that.

More Than One Scotland - Latest Article by Andrew

The fiddler brought his slow lament to a close as the church sat silent and expectant. The minister announced, “God Save the Queen” and the church rose as one. Rigidly to attention.