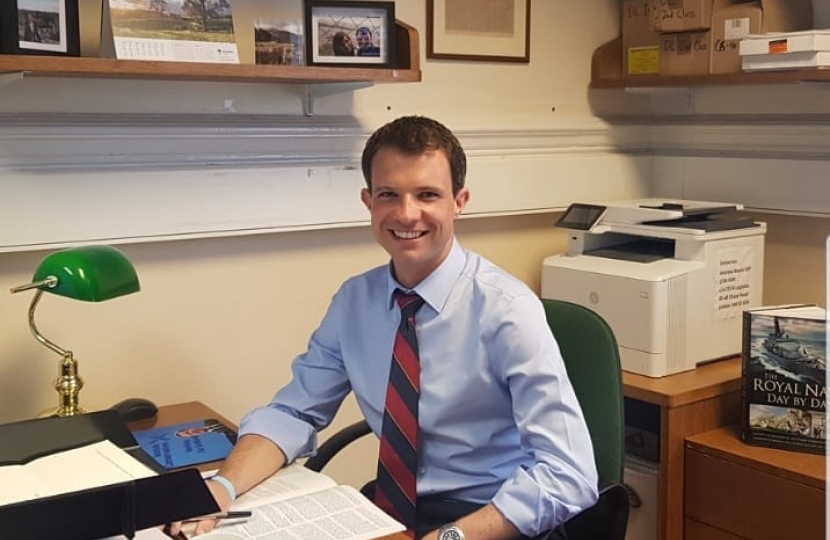 Well, that’s the last time I complain about not having a proper winter for years! As the snow continues to fall outside, I hope this finds you all safe and well. The Met Office are reporting that we are suffering the coldest temperatures and heaviest snow fall for over a decade- and I can believe it! Of course, snowy January and February’s are nothing new in our part of the world. I can barely remember a year growing up that we weren’t off school for at least one snow day a year, and the last few years have been incredibly mild in comparison. But, that’s not to say it makes it any easier. The council road teams, farmers and the contractors are doing a brilliant job keeping the main routes open- particularly the roads to and from the vaccination centres in the north east. They have an unenviable task and I’d like to thank them as they continue their work to keep our roads open for whatever essential purpose people are using them.

The vaccination role out continues apace, and it is good to see the British Army fully join the effort to increase the pace of delivery in Scotland. I was very pleased to see the Royal Scots Dragoon Guards assist in the setting up of the vaccination centre at P&J Live. I am, however, frustrated, as many are, at the confusion surrounding the location of vaccination centres for constituents and at the distances some are being asked to travel in these awful winter conditions. It was incredibly annoying to have the Alford centre closed after just a few days with residents being asked either to attend P&J Live or go to Huntly, some 40 miles away. In Portlethen and Newtonhill, most people are being asked to travel to Stonehaven, as are people from the very south of the Mearns and in Westhill, fast becoming one of the largest settlements in our region, people are being asked to travel all the way to Inverurie. Many of these routes, as you will be aware, do not have direct public transport and so people are relying on lifts and the kindness and generosity of groups like the Westhill Covid Resilience Group and the Portlethen Community Ambulance, among others.

In saying all that, I urge you please to try and make your Covid vaccination appointment when asked. It is so vital we stop the spread of the virus and if we can get everyone who needs it vaccinated soon, we can return this country to normal- something I know we all want.

In the House of Commons this week I have been busy, virtually of course. I asked a question to the Home Office on the slow roll out of the Emergency Services Mobile Network and when it would be made available to commercial operators. We have such a poor quality of mobile signal in our constituency- particularly around party of the Mearns, Durris, Drumoak and upper Dee and Donside. I was informed that there were problems last year with the opening of the masts to operators but that these have been resolved and we should be seeing a distinct improvement in our connectivity soon.

I also asked when we might here more on who will be authorised to operate the Seasonal Agricultural Workers Scheme in Scotland- something that farmers need to know as soon as possible. The Home Secretary pledged to write to me with more details which I will pass on to you when I have them.

On Monday evening I spoke in the Armed Forced Bill Debate. This is an important Bill that has to be reviewed every five years. It included provision to update the service justice system, give more flexibility to our reservists and puts the Armed Forces Convenant into Law. I used my speech to praise the work of the Armed Forces, raise concerns over the state of the Royal Naval Reserve which has had training activity suspended and praise the work of Aberdeenshire Council who were recognised by the MOD for their work with veterans last year. In particular I thanked Cllr Ron McKail of Westhill who acts as the area Armed Forces Champion. I attach a copy of my speech to read here  -

On Wednesday I used my question to the Women and Equalities Minister to ask about the alarming rise in homophobic hate crime. We often think in the UK that our work to create an equal, welcoming and safe society is finished, but since 2014, homophobic hate crimes have risen from 4,000 to 14,000. No one in our country should feel unsafe or suffer discrimination because of who they love and I asked what more we as a Government could do to support efforts to combat this worrying trend.

And Finally – it’s always nice to know people are listening to you, but it came as a genuine shock to read in the Times Red Box on Tuesday morning that, in a poll of Conservative MPs, I was ranked as the third most impressive Parliamentarian- behind Rishi Sunak and Matt Hancock! Who knows what my colleagues were thinking? Lockdown madness, surely!

Thank you as ever for your support- it means so much.