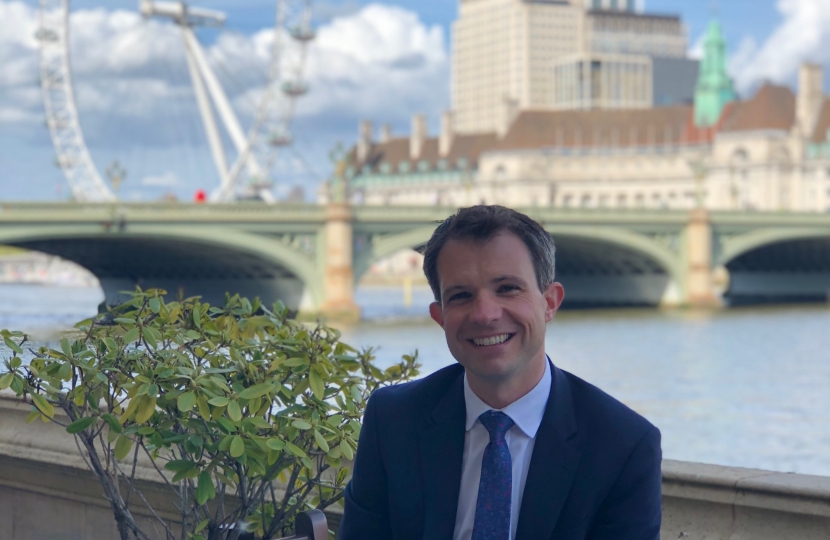 While representing West Aberdeenshire and Kincardine in the House of Commons is a huge honour and a privilege, it’s quite the commute to the office. So, when you represent a constituency 398 miles “as the crow flies” from Westminster, you develop a new appreciation for just how important air travel is, particularly for those who want or need to travel to Scotland.

Scotland has, of course, long been a top tourist destination for travellers from around the world, particularly the beautiful North East I am lucky to call home. Whether it’s the thirteen stop “Castle Trail” through my own constituency, an even longer tour of the Speyside distilleries, or even a trip up to Banffshire’s famous “Dolphin Coast”, the North East is a fantastic place to live and visit.

Visitors from around the world clearly agree with this assessment. In 2019, before the impact of the pandemic, visitors to Scotland made 17.5 million overnight trips, with a total spend of £5.9 billion, the highest figures over the last decade according to VisitScotland. This represents a huge contribution to our GDP, with much of this money flowing in from the US, Europe and further afield.

Scotland’s heritage and natural beauty is a huge asset to the UK, one we should invest in to keep the “union dividend” rolling in for Scottish businesses, particularly those in the hospitality sector who have been hit so badly by the pandemic. And while every visit to Scotland is a pleasure, business travel is also of paramount importance.

For example, without high quality, reliable air links, Aberdeen would not be the oil and gas capital of Europe it is today. The oil and gas industry isn’t just the beating heart of the local economy in the North East, employing many of my constituents, but is also crucial to the wider Scottish economy.

This is well understood across the Scottish political spectrum. The SNP’s 2014 economic plan for independence relied heavily on high oil prices and the continued exploitation of these resources. The subsequent downturn proved this would have been a disastrous model, but it does serve to underline just how central the industry is to Scotland’s economy.

With COP26 fast approaching, it might seem unfashionable to advocate for an industry widely demonised for its central role in the exploitation of fossil fuels. But what is not always widely understood in political circles is the huge contribution the oil and gas sector is making to achieving net zero, by developing and investing huge sums of money into clean renewable energy technology. When we reach net zero, as we will, we will have achieved it not despite the oil and gas industry, but in large part due to the incredible innovation and investment taking place in cities like Aberdeen.

The same is true for aviation – we cannot reach net zero without investing in sustainable air travel. As the vaccine rollout continues in the UK and around the world, many of us will be looking forward to a long overdue holiday, whether abroad or to another nation of our United Kingdom (the second paragraph of this article may have given you some ideas!). The demand for air travel is not going to disappear any time soon, and we should take the opportunity to make sure that the future of British aviation is sustainable, drives investment around the UK, and strengthens our precious union.

For this reason, I welcomed the UK Government’s Union Connectivity Review when it was announced, and eagerly await its recommendations. It is not enough to simply make sure that each part of the UK receives investment in transport infrastructure – we need a joined-up approach to encourage domestic travel around the UK, its nations, and its regions. If people cannot easily and quickly travel around the UK, they cannot enjoy everything it has to offer them. Without those opportunities and experiences, we run the risk of letting support for the Union stagnate when it should be growing.

The best way to do this, at the lowest cost to the taxpayer, is to support clean aviation growth by backing regional airports like Aberdeen, Bristol, and Belfast – particularly where they need to expand to increase capacity. Too much of our national conversation about airport capacity is focused on Heathrow and the other London airports, just as too much of Westminster’s time is spent talking to Westminster about Westminster.

Investing in sustainable aviation around the UK would be a fantastic way to show that we are a party and a government for the whole United Kingdom, as well as providing fresh opportunities for the Government’s levelling up agenda. Wherever there is investment in airports and the infrastructure which serves them, thousands of jobs and opportunities are created in the local area and further afield through the supply chain. Increasingly, as in the oil and gas sector, many of these are “green” jobs.

And while it is right that the Government spend money on levelling up in communities which have lacked investment for many years, it is important to remember that this doesn’t just mean spending in the “Red Wall” and the North of England. Communities that were left behind by Labour deserve to see investment and support. But we mustn’t take our eye off the ball in other parts of the UK, lest we repeat the mistakes of previous governments and create a new generation of left behind communities.

I’ve welcomed the measures the Government has taken over the last 18 months to support airline operators, particularly household names like British Airways – long-established great British brands we want to preserve. But other parts of the aerospace and aviation industries are suffering too, in what the industry body ADS called a “deepening crisis” earlier this year.

Rolls-Royce, another great British household name, made significant job cuts to its global workforce last year, as did Airbus. Both companies are big long-term investors in the UK and significant employers in the South West of England, a major hub for the British aerospace industry in general.

So, what is to be done? The Union Connectivity Review was a good first step and I eagerly await Sir Peter Hendy’s recommendations, to be published this summer. But in the meantime, we should be looking at what we can do in the immediate short term to increase regional airport capacity – getting ahead of the demand rather than trying to catch up. This means working closely with regional airports and investors who are willing to help build the infrastructure needed to increase capacity in a green, sustainable fashion.

And what we mustn’t do is uncritically accept the narrative that British aviation is incompatible with a net zero future – just as we’d be wrong to take that view of the oil and gas sector. The public want politicians to come up with sensible, balanced solutions to combat climate change. They won’t thank us for knee-jerk reactions or short-sightedness.