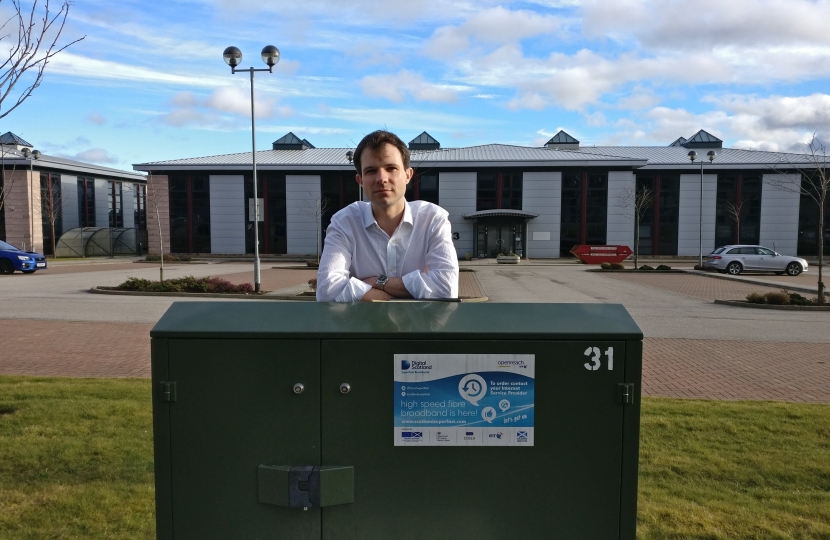 Andrew has described a meeting with BT as positive following discussions over rural broadband, the Universal Service Obligation, and the future provision of 4G connectivity.

Speaking after he met with BT on Monday, Andrew said;

"The Universal Service Obligation (USO) was intended to give everyone, wherever they are in the United Kingdom, the right to request a decent and affordable broadband connection. It was an incredibly important piece of UK Government legislation and I'm delighted to see that it is already having an impact."

West Aberdeenshire and Kincardine has historically been one of the poorest ranking constituencies in the UK for broadband provision, due to the rural nature of around 90% of the land area.

Currently 11% of people in West Aberdeenshire are unable to access the USO service of ‘decent broadband’ through Fixed Line connection, a number that is significantly higher than the average constituency which is around 5%.

Mr Bowie expressed surprise that Durris and Drumoak were the highest ranking areas by percentage, saying;

"Durris and Drumoak are two of the closet rural areas to the city, when you consider that within a matter of miles there are large areas of housing receiving 50mps broadband speed, and talk of over 100mps on the way, it seems almost impossible that such a high percentage of homes in these two villages cannot reach the USO level of 10mps."

BT have calculated that only 4.4% of the population will be unable to receive a decent level of broadband through either fixed line or 4G solutions, a vast improvement on where things stand today. Their new service, a 4G Box that they will attach to the house, is on offer to all who cannot get decent broadband through a fixed line connection.

Further information including whether you are able to access the service, and the associated connection costs can be found here -

The Shared Rural Network is a £500m project to build an interconnected 4G infrastructure network across the entire United Kingdom, this should have near full connectivity by 2026. BT and other companies are currently implementing this roll out through a body called DMSL.

Commenting on the progress being made, and the hope of near full connectivity by 2026, Andrew said;

"It is all very positive news, one of the first issues that was raised with me as an MP was rural broadband, nearly 4 years ago. Despite being funded by the UK Treasury, the roll out of broadband and full fibre here in Scotland was devolved to the Scottish Government and I think its fair to say has been slow and cumbersome, missed targets and deadlines have been common place. The legislation passed by the UK Government to introduce a Universal Service Obligation has been a game changer and we're already seeing the benefits. Add to that the investment in 4G and 5G infrastructure, the emergency services network masts and countless other projects that the UK Government have promoted, supported and invested in, and you can start to see just how big a priority rural broadband is for the UK Government. It's another shining example of a One Nation Conservative Government working for the whole of the United Kingdom."