Strength in Union, The Case for the United Kingdom - Andrew Launches Book 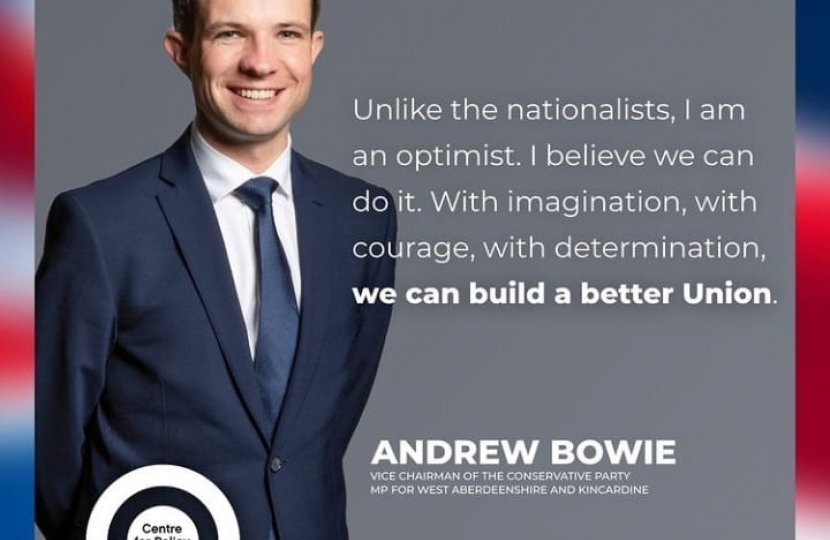 Following the 7th anniversary of the referendum on Scottish Independence, Andrew and the CPS, the country’s leading centre-right think tank, have brought together an all-star cast of Conservatives to highlight what the Union means to them and why they believe its continuation is of benefit to all its people.

'Strength in Union, which was formally launched with an event tonight at the Conservative Party Conference in Manchester, includes essays from each of the Secretaries of State for Scotland, Wales and Northern Ireland, as well as Lord Hague of Richmond, former Prime Minister Theresa May and a foreword from the Rt Hon Michael Gove.

The collection aims to show how important the Union is, even to those who may not live in Scotland, Wales or Northern Ireland, and why the Government is right to fight to keep the UK together.

Key themes to emerge are pride in the shared success, prosperity and innovation which have been possible because of the Union of our nations; how the United Kingdom’s broad shoulders and global reputation allow us to defend democracy and protect the most vulnerable both at home and abroad; how our international influence drives growth and investment in all parts of the UK; and the strength and integrity of our defence forces, a powerful reminder of what Scotland, Wales, England and Northern Ireland can achieve side by side.

You can read the collection of essays here - ‘Strength in Union’