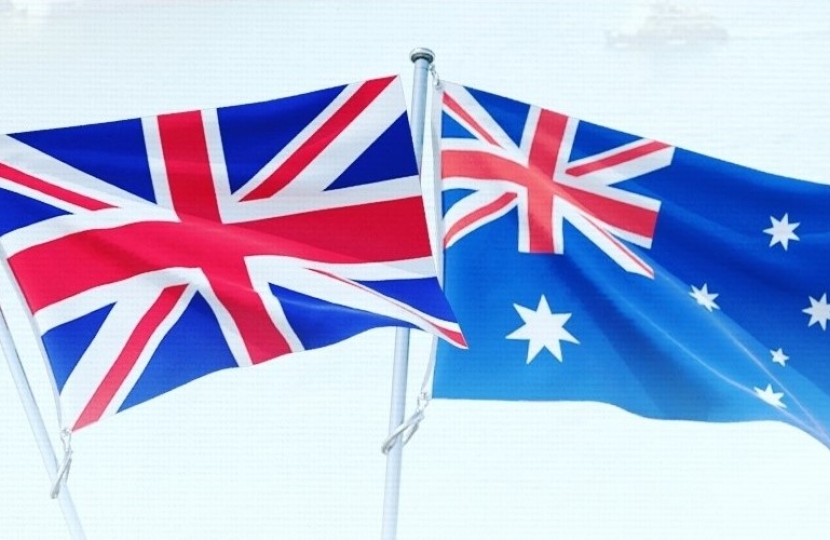 The UK has secured a trade deal with Australia eliminating tariffs on all UK goods and boosting jobs and businesses across the country, in the first major trade deal negotiated from scratch by the Government since we left the EU.

The main elements of the deal were agreed by Prime Minister Boris Johnson and Australian Prime Minister Scott Morrison at a meeting in Downing Street last night [Monday 14 June]. A final Agreement in Principle will be published in the coming days.

The leaders reaffirmed the enduring partnership between the UK and Australia during their discussion and agreed to work closely together on defence, technology collaboration and tackling climate change – including through a future Clean Tech Partnership.

The new Free Trade Agreement means iconic British products like cars, Scotch whisky, biscuits and ceramics will be cheaper to sell into Australia, boosting UK industries that employ 3.5 million people across the country. The UK-Australia trade relationship was worth £13.9 billion last year and is set to grow under the deal, creating opportunities for businesses and producers in every part of the UK.

British farmers will be protected by a cap on tariff-free imports for 15 years, using tariff rate quotas and other safeguards. We are also supporting agricultural producers to increase their exports overseas, including to new markets in the Indo-Pacific.

Under the agreement, Brits under the age of 35 will be able to travel and work in Australia more freely, opening exciting opportunities for young people.

"Today marks a new dawn in the UK’s relationship with Australia, underpinned by our shared history and common values.

"Our new free-trade agreement opens fantastic opportunities for British businesses and consumers, as well as young people wanting the chance to work and live on the other side of the world.

"This is global Britain at its best – looking outwards and striking deals that deepen our alliances and help ensure every part of the country builds back better from the pandemic.

"The Department for International Trade are to be congratulated for the sterling work they've done in forging new deals around the globe, as well as strengthening Britain's bonds overseas.

"This deal with Australia will mean whisky distilleries in my constituency and across Scotland will be able to export their world-leading products with no tariffs.

"It includes import protections for farmers, creating new opportunities for them to sell abroad and paves the way into the Indo-Pacific region, which has a trading value of £9 trillion."

The free trade deal will eliminate tariffs on Australian favourites like Jacob’s Creek and Hardys wines, swimwear and confectionery, boosting choice for British consumers and saving households up to £34 million a year.

It will provide benefits across the whole of the United Kingdom, including:

An FTA with Australia is also a gateway into the fast-growing Indo-Pacific region and will boost our bid to join CPTPP, one of the largest free trade areas in the world, covering £9 trillion of GDP and 11 Pacific nations from Australia to Mexico.

The UK exported £5.4 billion worth of services, including £1.4bn of insurance and pension services and £780m of financial services, to Australia in 2020. Red tape and bureaucracy will be torn down for more than 13,000 small and medium sized businesses across the UK who already export goods to Australia, with quicker export times.

Parliament will have the opportunity to scrutinise the agreement in detail once the text is published, along with an impact assessment and explanatory memorandum.