When Sweden went Right – and what the Conservatives can learn 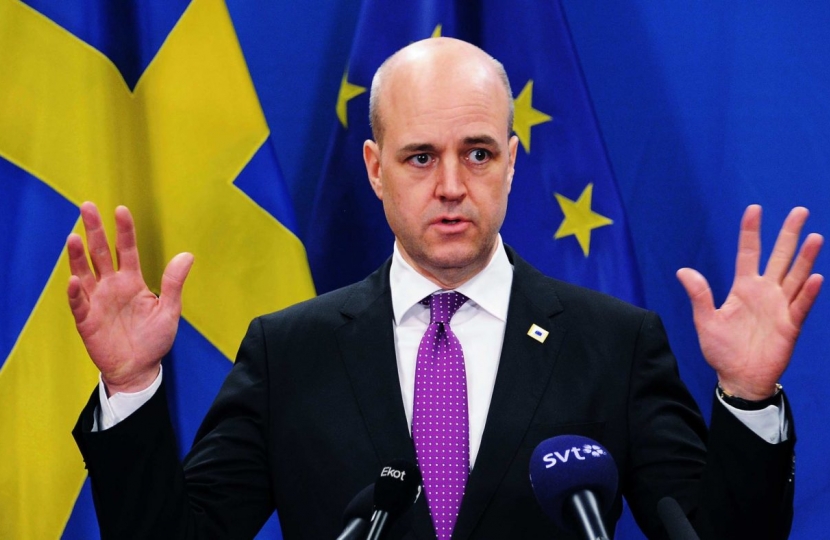 All this must be remembered. It must also be remembered that you cannot simply transpose the experience of one political party in another country into another. Different societies, political traditions and histories make that an impossibility.

But I do think one of those experiences has timely and pertinent lessons for us.

Two days before Christmas found me sitting in the Ericson Globe in central Stockholm attending my first-ever ice hockey game – Djurgarden v Lulea. Also in the crowd happened to be the former Prime Minister and leader of the Swedish Moderaterna, Fredrik Reinfeldt.

I didn’t know this until the big-screen cameras zoomed in on him. Immediately I had that sinking feeling that always comes when politicians are shown in the crowds at sporting events as I awaited the ritual booing. However, instead, the entire arena suddenly applauded. I was stunned. The Swedes are known the world over for being a reserved and polite people, but after seven years of visits, I knew enough about them to know that when it came to their politicians, they were just as critical and certainly less respectful than even the Brits!

The applause? Mr Reinfeldt, it turns out, despite leading his party to defeat in 2014, remains incredibly popular with the majority of Swedes. Why?

This is the story of the reform, rise, and electoral success of the Moderaterna under Reinfeldt, why he positioned the party where he did and how, for the first time ever, he led them to two successive election victories.

At its heart, the Swedish Moderaterna of today are a pragmatic, liberal, centre-Right conservative party espousing views similar to those of David Cameron in his reforming pomp in the late 2000s.

This was not always the case. Relying too heavily on its base, seen as the party of the aged and privileged, the Moderaterna slumped to an all-time low in the general election of 2002, polling only 15.2 per cent.

Fast-forward four years and, under Mr Reinfeldt, the party found itself with 26 per cent of the vote, at the head of a centre-Right coalition Government which commanded a majority of seats in the Reichstag.

How did they manage this incredible turnaround? Of course, the popularity of Mr Reinfeldt helped, but the Swedes didn’t simply wake up one morning day and decide to throw off decades of socially democratic consensus. And the fact remains that, even today and even on the Right, the Swedish people overwhelmingly favour consensus, equality and expansive public services. In this I would suggest they are quite close to the Scots.

And yet, in 2006, they elected a radically centre-Right government. In 2010, they re-elected them.

How? Well, the first lesson to be learnt is that people, all people, like stability and reassurance. In this the Swedes are no different. With this in mind, Reinfeldt took possibly the biggest gamble of his time as leader of the opposition when in 2004 he conducted an interview with a trade unionist magazine in which he declared that he believed the Swedish labour law (one of the most generous in the Western world) was working. He even went so far as to say that he believed it provided a quintessential foundation for safety in the labour market. This was something no Moderaterna leader had said – nor would have dreamed of saying. But Reinfeldt knew that ordinary Swedes would not vote for a party that was intent on tearing up the foundations on which many Swedes had built their lives and livelihoods.

For the next 10 years – eight of which were in Government – Swedish Labour law remained untouched. More than that, in the two years leading up to the 2006 election, he accepted and adopted every single promise made by the Social Democrats on social welfare spending – even going so far as to as to improve on some of them.

He switched the party’s priorities from cutting tax for the wealthy to making tax fairer for the middle-income earners in an effort to widen the tax base, and in Government he drastically cut taxes for the lower paid in an effort to stimulate the economy.

He made the Moderaterna relatable to ordinary, middle-class, middle-aged Swedes. He made sure that the Moderaterna were the ones that understood and could find solutions to the “life puzzle” facing that most important group of voters – upwardly mobile, educated, young professionals bringing up children.

With radical policies on education and health, with a promised tax break on household services, and by promising to keep but reduce the cost of the social democratic welfare state, the Moderatna were able to appeal to a group we would know as “the just-about managing”.

There was one more, tactical decision taken by the party – they did politics differently. For decades, the default position in Scandinavian politics had been to “react” to Social Democrat policies. To allow themselves to be defined by their opposition to Social Democrat positions. Indeed, in Norwegian Social Science, the Social Democrats are frequently described as an eagle, soaring above the fray, causing all below to take up reactive, defensive positions. The Moderaterna under Reinfeldt changed all that. They simply ignored the Social Democrats and embarked on a programme of announcing new and radical policies and decisions, forcing the Left on to the back foot for the first time in a generation.

And so in 2006, the Moderaterna were elected with over a quarter of the popular vote, at the head of a centre-Right coalition (the Alliance) and embarked on an ambitious programme of reform – reducing the size of the state, overturning decades-long consensus, making the system easier for SMEs to start up and grow, introducing free schools and choice to education, allowing private companies to compete for government tenders in public transport and delivery of health services, and beginning a massive programme of infrastructure investment. Quickly, the results were seen – Sweden became one of the most business-friendly countries in Europe and a hub for high-tech start-ups (see, for example, Spotify).

2010 saw the Moderaterna re-elected with 30 per cent of the vote, and although the Alliance did lose its overall majority, this was the first time in a century that a centre-Right government had been re-elected in Sweden. By 2011, whilst much of the West was still in a stuttering recovery from the economic crisis, Sweden’s economy (which had barely been touched by the recession) was growing at 6.4 per cent, unemployment was falling, it had established a budget surplus and public debt was sitting at around 40 per cent of GDP.

What happened next was unfortunate – a rise of the far Right, stoking anti-immigrant tensions, eroded a small but significant part of the Moderaterna’s base as well as a sizeable proportion of Sweden’s blue-collar workers, whilst a stubbornly immovable long-term unemployment figure cast a pall over otherwise miraculous economic growth. Therefore, compounded by a natural desire for change reflected in all democracies, the party, despite still polling in the mid-20s (in a 10 party system) and despite the alliance picking up 141 seats out of 349 (after eight years in government), the Moderaterna found themselves back in opposition. Reinfeldt promptly resigned as leader.

Despite this loss (which they may be about to overturn in this years general election), one can only look back with awe at the reforming zeal Reinfeldt brought to a flailing, unattractive political party. Turning it around, making it appeal to a new key demographic, succeeding in winning two general elections, transforming the “Swedish model”, the Swedish economy and wielding an influence on the European and world stage far beyond what Sweden’s 10m-odd population would seem to justify.

As I said, I will let the reader draw his or her own lessons and conclusions from this remarkable story.

However, what is clear to me is that a popular leader, with radical policies and a willingness to gamble, can take a party that was once thought of as irrelevant and on the fringes to recover the centre ground, recover legitimacy and recover relevance.

The Moderaterna became a party unafraid to reform itself in order to regain legitimacy. And in showing it could reform itself, it proved it could reform the country. It became a party willing to take a gamble in order to win the trust of the people and appeal to a new demographic. It became a bold party willing to take radical action, introducing competition and choice into healthcare and education. And it became a party that refused to solely be defined by its opponents. It ignored the cosy consensus and appealed directly to the people.

Surely I can’t be the only one to see the parallels and opportunities for us, our party and our nation?

Originally published on CapX.co on the 16th January 2018