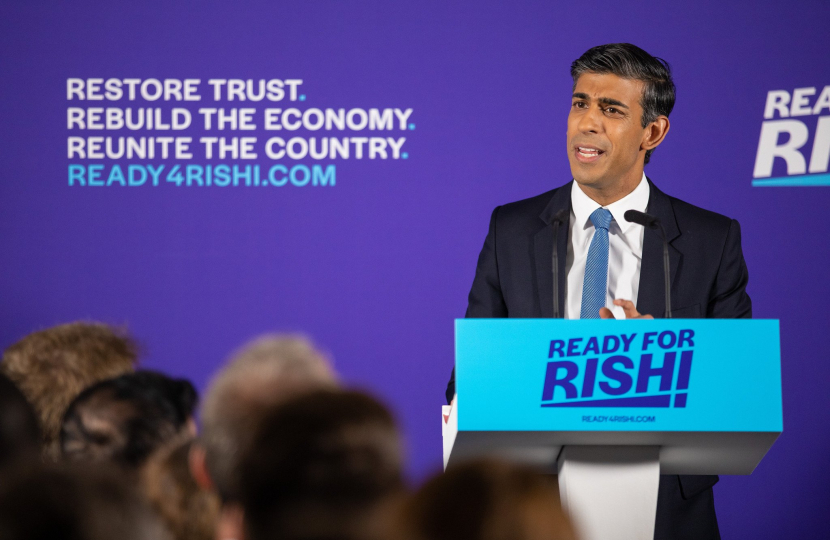 I thought long and hard about who I was going to back to become leader of the Conservative and Unionist Party.

We have an amazing array of talent standing to be the next Prime Minister. The most diverse slate of candidates of any leadership election, for any party, in British history.

But for me, when it came to the crunch, there is only one person I believe is up to the job of taking the tough decisions necessary to deal with the huge challenges we face as a nation and ultimately, the only one with the experience necessary to stand up to Nicola Sturgeon and ensure our United Kingdom, our One Nation, remains whole. And that is Rishi Sunak.

I know this because he has already demonstrated, through his actions, that he has what it takes.

He was the Chancellor that ensured the Furlough Scheme, which saved 700,000 Scottish jobs, applied to the whole UK.

He was the Chancellor that ensured that businesses across the whole United Kingdom would benefit from the bounce back loans that kept many afloat through the most difficult times.

He ensured the SNP agreed to Free Ports coming to Scotland. He made sure the Levelling Up fund could be accessed by Scottish Local Authorities – by-passing the Scottish Government completely. By announcing a council tax rebate for English homeowners, that the SNP would be forced to do the same in Scotland.

Unlike the other candidates, he not only speaks about the Union in easy platitudinous phrases that make us feel good about ourselves and our past, he has taken action to govern for our whole United Kingdom and is confident about our future. Wrapping ourselves in the Union Jack and humming Land of Hope and Glory will not keep the United Kingdom whole.

We will do that by our actions.

Rishi Sunak has led the pushback against the ‘devolve and forget’ mentality that permeates Whitehall. The easy, lazy approach to governing that says, “Scotland? Pass it to Holyrood.” He knows that with their record in Government, we cannot trust the Scottish National Party to act in the best interests of the Scottish people- only in the interests of the SNP.

He does it not because it’s easy, or popular. He does it because it is the right thing to do. Because he is a Unionist to his core.

His grandparents moved to this country half a century ago. Yes they settled in Southampton, in England, but they never saw themselves as anything but British – having moved to the United Kingdom. Our One Nation.

I have known Rishi since I was first elected to Parliament in 2017. I have seen him engage with the Scottish Government positively and constructively when needed. But never afraid to stand his ground when called upon.

In the next few years that will be more important than ever.

It is not the time to entrust the future of our United Kingdom to someone untested by the rigours and challenges of decision making at the top of Government.

Forged in a crisis, a passionate Unionist, a man who seeks to be judged by his actions not simply his words.  Rishi Sunak is the Leader this country needs. And that is why I am backing him to be the next Leader of Conservative Party and Prime Minister of our country.