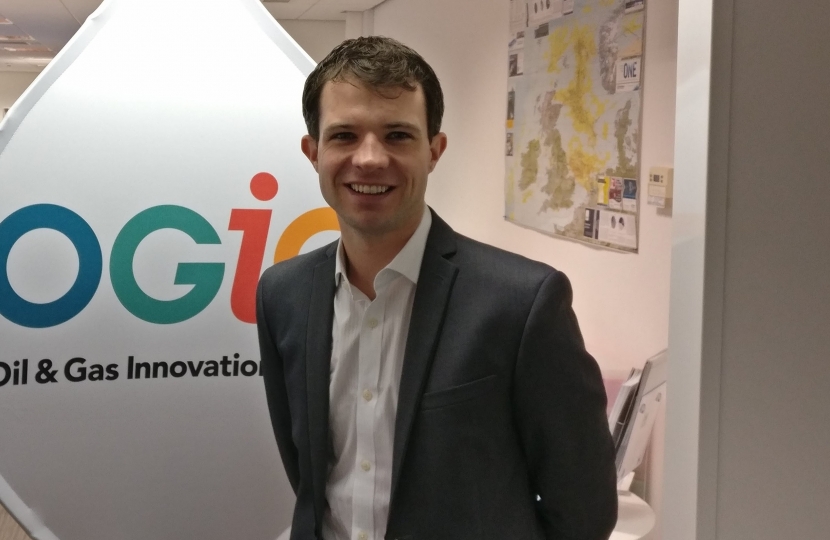 Speaking after the British Government announced a £16bn Energy Transition Deal, Andrew said; "The Scottish Conservatives have been championing this since 2017. Delighted to see it, with such ambition, come to fruition. A vote of confidence in our region and the industry."

High-skilled oil and gas workers and the supply chain will not be left behind in the transition to a low carbon future, the UK government vowed today (Wednesday 24 March) as a landmark North Sea Transition Deal is agreed with industry.

The sector deal between the UK government and oil and gas industry will support workers, businesses, and the supply chain through this transition by harnessing the industry’s existing capabilities, infrastructure and private investment potential to exploit new and emerging technologies such as hydrogen production, Carbon Capture Usage and Storage, offshore wind and decommissioning.

Through the Deal, the oil and gas sector, largely based in Scotland and the North East, government and trade unions will work together over the next decade and beyond to deliver the skills, innovation and new infrastructure required to decarbonise North Sea production. Not only will the Deal support existing companies to decarbonise in preparation for a net zero future by 2050, but it will also create the right business environment to attract new industrial sectors to base themselves in the UK, develop new export opportunities for British business, and secure new high-value jobs for the long-term.

Extracting oil and gas on the UK Continental Shelf is directly responsible for around 3.5% of the UK’s greenhouse gas emissions. Through the package of measures, the Deal is expected to cut pollution by up to 60 million tonnes by 2030 including 15 million tonnes from oil and gas production on the UK Continental Shelf - the equivalent of annual emissions from 90% of the UK’s homes - while supporting up to 40,000 jobs across the supply chain.

Key commitments in the North Sea Transition Deal include:

An orderly transition is crucial to maintaining our energy security of supply, supporting high-value jobs, and safeguarding the expertise necessary to achieve a lower carbon future.

The UK government will therefore introduce a new Climate Compatibility Checkpoint before each future oil and gas licensing round to ensure licences awarded are aligned with wider climate objectives, including net-zero emissions by 2050, and the UK’s diverse energy supply. This Checkpoint will use the latest evidence, looking at domestic demand for oil and gas, the sector’s projected production levels, the increasing prevalence of clean technologies such as offshore wind and carbon capture, and the sector’s continued progress against its ambitious emissions reduction targets.

The UK government believes it is vital that any future licenses are granted to industry only on the basis that they are compatible with the UK’s climate change objectives. A dynamic checkpoint enables the assessment of ongoing domestic need for oil and gas, while expecting concrete action from the sector on decarbonisation. If the evidence suggests that a future licensing round would undermine the UK’s climate goals or delivery of Net Zero, it will not go ahead. The UK government will design and implement the checkpoint by the end of 2021 through extensive engagement with a wide range of stakeholders.

In a further move to support the shift to green technology and renewable energy in the UK and around the world, the UK government has announced it will no longer provide support for the fossil fuel energy sector overseas from 31 March 2021. This follows the Prime Minister’s commitment to end taxpayer support for fossil fuels projects overseas as soon as possible at the Climate Ambition Summit last December and the decision on the date to end this comes after consultation with industry. This will include UK Export Finance support, international aid funding, and trade promotion for new crude oil, natural gas and thermal coal projects - with very limited exceptions.

Today, we are sending a clear message around the world that the UK will be a nation of clean energy as we build back better and greener from the pandemic.

We will not leave oil and gas workers behind in the United Kingdom’s irreversible shift away from fossil fuels. Through this landmark sector deal, we will harness the skills, capabilities and pent-up private investment potential of the oil and gas sector to power the green industrial revolution, turning its focus to the next-generation clean technologies the UK needs to support a green economy.

At every step on the path to net zero emissions, we will create the right conditions for new green industries to base themselves in the UK and create new high-value employment opportunities, while future-proofing existing businesses to secure the long-term viability of jobs in our industrial heartlands.

The offshore oil and gas industry has been a major British industrial success story. For decades, the sector has strengthened our energy security, generated significant tax revenue to fund our public services, and supported hundreds of thousands of jobs across the UK. From the Shetland Islands and Aberdeen, to Teesside and the Humber, the industry is critical to the health of local economies.

Oil and gas is still vital to the production of many everyday essentials like medicines, plastics, cosmetics and household appliances - this is likely to remain the case over the coming decades as the UK transitions to low carbon solutions. Indeed, the government’s independent Committee on Climate Change recognises the ongoing demand for oil and natural gas, including it in all scenarios for how the UK meets its target for achieving net zero emissions by 2050.

We need to urgently end our reliance on fossil fuels and through our pioneering North Sea Transition Deal we will do so without putting our economy and communities at risk.

While the future oil and gas sector will look very different to how it does today, the industry, businesses and supply chains it supports will have a new mission to help the UK decarbonise and develop the clean technologies of the future, as we lead the green industrial revolution.

The oil and gas industry has already made great strides towards a greener, more sustainable future and the North Sea Transition Deal, agreed between the UK government and industry, takes those ambitions a step further.

This is not just about making the transition from hydrocarbons to renewables. It’s about a transition of jobs, skills and expertise as well.

The UK government has worked consistently and intensively with the industry, and we will continue to do so, to make progress on a scientific, data and evidence-led basis.

The North Sea Transition Deal is a transformative partnership which will harness the expertise of the UK offshore oil and gas industry to urgently meet the country’s climate ambitions of net zero emissions by 2050.

It will unlock billions of pounds of investment and see government and industry work together to deliver a homegrown energy transition, realising innovative low carbon solutions that can be exported globally.

The Deal will safeguard UK energy security, providing affordable energy to millions of households, secure tens of thousands of jobs in industrial heartlands across the country and support the UK economy. It is the first deal of its kind by any G7 country and a striking example of the UK showing global leadership on climate change ahead of COP26.

This deal marks an exciting new chapter for the North Sea, confirming energy transition in action. It is the culmination of a lot of work between government, industry and the OGA. As long as oil and gas remain part of the UK’s energy mix, they must be produced more cleanly and in line with net zero.

Our role includes monitoring and holding industry to account on its emissions reduction performance. The recent funding for a number of energy transition projects is very timely. We are happy to be supporting projects like Acorn, Hynet, Net Zero Teeside and Zero Carbon Humber, along with the Energy Transition Zone and the Global Underwater Hub.

Our studies show how the UK Continental Shelf can provide 60% of the UK’s overall carbon reduction requirements to meet Net Zero 2050, through electrification, carbon capture and storage, hydrogen and offshore wind.

There is huge growth potential in the new and emerging industries central to this transition away from oil and gas:

To aid the transition to a green economy, today’s package follows the recent Budget in which the Chancellor committed to funding that targets the oil and gas sector and supports businesses to develop green energy. This includes up to £27 million for the Aberdeen Energy Transition Zone to transform the area into a green energy hub, and up to £5 million additional funding for the Global Underwater Hub based in Aberdeen to open-up opportunities for the city to become a global hub for underwater engineering, including in offshore wind and hydrogen.

To ensure the UK economy remains competitive and resilient on the path to net zero, companies in all sectors must be prepared to address their climate-related risks and opportunities. Which is why the government has also published today proposals setting out how the UK’s largest companies and professional services firms representing £4 trillion in turnover will be required to prepare for the transition to a low carbon economy.

These proposals will ensure the UK’s most significant companies are analysing, understanding and disclosing their climate-related risks and opportunities to unleash a wave of private capital necessary to reach net zero emissions by 2050. This is part of the UK’s commitment to be the first G20 country to make Taskforce for climate-related financial disclosures (TCFD) aligned disclosures mandatory across the economy.

The North Sea Transition Deal delivers on the government’s 2019 manifesto commitment for a transformational sector deal.