Supporting the Agriculture Bill During This Evenings Debate 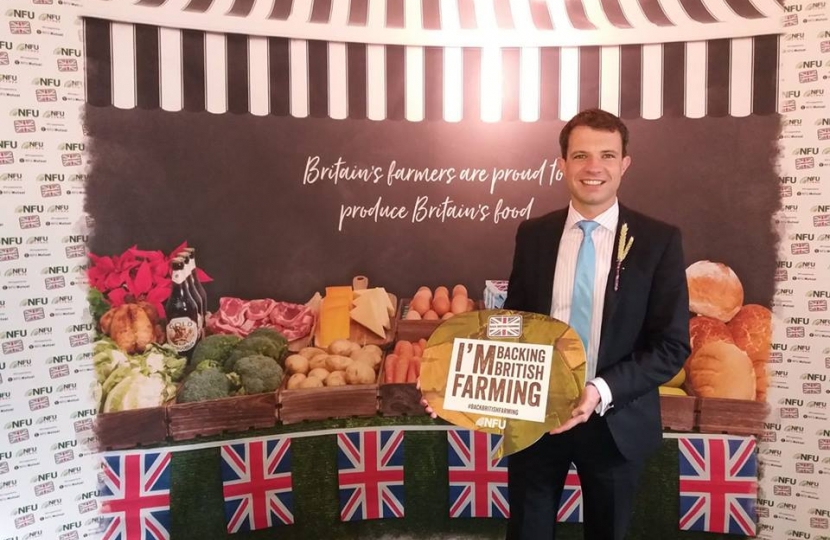 Andrew spoke in support of the Agriculture Bill during the debate this evening, explaining why the bill will be beneficial to Scottish Farming and why he could not support the Lords Amendments that would curtail those benefits.

Andrews full speech in written format is below;

"It is a pleasure to be called to speak this afternoon on this vital piece of legislation, which marks the beginning of a new era for British agriculture.

Much of this debate today has been, understandably, focussed on Lords Amendments 12 and 16.

I’m sorry to disappoint the House but, as un-original as I am, I will be restricting my remarks to these amendments too.

I have the pleasure of representing a constituency in Aberdeenshire, home of the best beef, lamb, berries & cereals produced anywhere in the United Kingdom with the most determined farmers in the country – where battling the elements (and politicians in Holyrood and Westminster) is a daily grind. But they do- and like farmers the length of this country, they have ensured that food production has continued in this most difficult time.

And, of course, this Bill, these Lords Amendments have given me pause for thought.

Just as the amendments in this House put by  Honourable Friends the Members for North Dorset and Tiverton and Honiton respectively too made me think.

The Honourable Member for North Dorset will know that it is incredibly rare for me to disagree with him on any matter - and I do so today cautiously and with the utmost respect… for I know that the intention behind his and the Member for Tiverton and Honiton, and their Lordships, is utterly good- to protect UK farmers from competition from sub standard imports.

And of course I have listened to the representations – by email, phone, over social media, in person- yesterday at church(!), from farmers and food producers.

But, Mr Speaker, I am unashamedly pro free trade. Purely and simply because of the power it has to raise people out poverty. We have seen, too often recently, the damage done by countries looking inward, becoming protectionist, putting *insert name of country here* first.

Well, I want to put Scottish, specifically, North East Farmers first. First in the queue to benefit from the trade deals we are negotiating now.

In the next 30 years, supply of food needs to rise by about 50% to meet the needs of a wealthier, growing, global population. I don’t want anything that would stand in the way of our high quality, world leading Scottish and British products reaching the shelves of consumers around the world.

In attempting to enshrine in law, as well this meaning amendment would, food imported to the UK to be: equivalent to, or exceed, the relevant domestic standards and regulations in relation to— (i) animal health and welfare, (ii) protection of the environment, (iii) food safety, hygiene and traceability, and (iv) plant health,” we would put at risk our ability to sell our products overseas and put at serious jeopardy our ability to carry on importing many of the foodstuffs we already do at the moment!

This amendment would harm UK consumer and business interests. We already import a high quantity of goods from developing countries (£3.7bn between 2016-2018). This includes products sold directly to consumers (bananas from the Dominican Republic) and goods processed into final products (black tea from Kenya, coffee from Vietnam, cocoa beans from Ghana). We do all this under existing EU rules.

None of the transitioned EU FTAs have exported domestic welfare production standards; this amendment would mean the existing mandate for our European Union Trade Deal – a deal we all want to see succeed, would have to be altered; no current imports to the UK are required to meet our domestic production standards.

Mr Speaker, it is precisely our high standards and high quality of produce that makes our produce so attractive to the outside world. And, because of that, and because we believe in high welfare standards, the Government has given its commitment that in negotiating trade deals, we will not allow our domestic welfare production standards to be in any way diminished. We will protect, defend and enhance our food safety, environmental and animal welfare standards and we will actively seek to export these, world leading standards, and our expertise, to new partners around the world.

This country is a world leader on animal welfare and food production standards. We are champions of free trade. These two principals are the foundations of what Global Britain seeks to be. These are the pillars of who we are.

Pillars of the new Britain this Government seeks to build.

Therefore, for all these reasons, because I support Scottish farmers, because I want to se our produce sold and enjoyed across the world, I cannot support the Lords Amendments today."